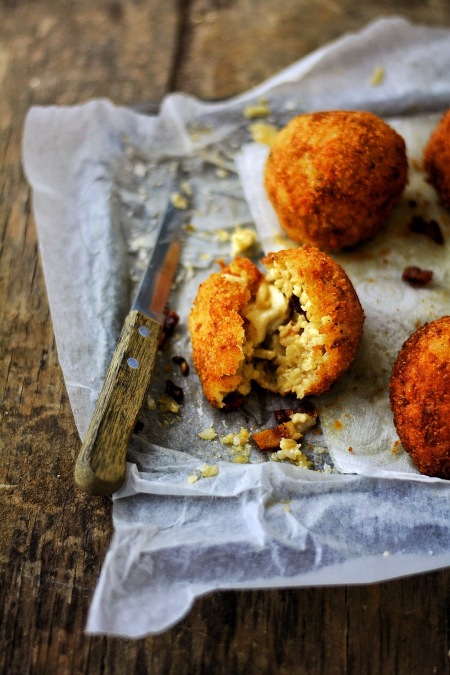 “I quite like them” said Noah after he’d eaten half an arancini and left the rest on the kitchen bench, wandering off to then hole up in a corner with a book. Bee says she still thinks they’re a strange idea (I mean, who wouldn’t love a deep-fried rice ball? And Maya, whom I think perhaps ate too many strawberries before supper gingerly nibbled the corner off and then stared into space for a while, dreaming up her next, no doubt cheeky move.

The past week has been bonkers, we are longing for some calm evenings in our life, that don’t involve falling asleep face down in the soup.

After sitting on a chair made of the hardest substance known to man in a howling ice gale at Crystal Palace’s outdoor cinema, part of the annual Crystal Palace Festival, my bum is only just getting some feeling back into it. The film, Sideways, will now forever be associated with numbness in the bottom. And lack of any feeling in my fingers and toes. These are some of the problems I have to deal with in my life. It’s difficult.

Another part of the festival, and in a performance of true Englishness, the spoken word evening we went to was as if Totnes were on LSD. Accordions and typewriters accompanied whispered poetry in a baking hot room again on rocks for seats. The heat had made the room smell very human, like a poetry school changing-room.

And in a modern tableau, at the festival itself, while the sun baked down on us, a nun, staring into her phone while walking along bumped into me. Perhaps she thought God would guide her. Perhaps he was on another call.

Among all this, there has been good food, especially at one of my favourite restaurants, Alle Testiere from Venice doing a guest night at Polpetto in Soho. That was a real treat. Delicious seafood, spider crab, Venetian snacks and more all came to me in London. Sadly, we couldn’t get a  babysitter, so Bee stayed at home. Although she’s not that keen on seafood, so it could have appeared to be a little convenient.

And that reminded me that I’ve been meaning to make arancini for ages. Nothing to do with Venice, but I did eat little deep-fried breadcrumbed balls filled with stuff to start. So on Thursday, I busted the children out of after school club and brought them home to ignore me and my cooking. Although, I did catch Maya drinking the vinaigrette straight from the mixing jar. She loved that, at least.

Ingredients
300g risotto, approx
550ml chicken or vegetable stock
1 small onion, diced finely
1 garlic clove, crushed
Olive oil
A large knob of butter, be generous
Parmesan to grate, salt to season
Panko breadcrumbs for coating
1 egg, beaten with a splash of water
1 ball of mozarella
A tablespoon of beef ragu per ball (optional, you can just make cheese ones, but I like to make a batch and save it for tagliatelle during the week)
Rapeseed oil for frying

Method
Make the risotto in the usual way, until it’s creamy and unctuous but with a hint of bite.
Shake the pan violently as you stir in a load of butter and cheese at the end then cover and leave for five minutes. Check and adjust the seasoning, risotto needs to be well seasoned.
Spread the cooked rice out on a tray and leave it to cool quickly. Stir it around every now and then to help.
When cool, take a small handful and put a nugget of cheese in the middle. Add a spoonful of the meat sauce if using and form a ball around the filling. Add a little more rice if you need to. I made the cheese ones into cone shapes after to differentiate them, but that’s your choice.
Dip each ball in beaten egg then roll in the breadcrumbs until really well covered. Dip and roll again, giving it a second coat if you feel it needs it.
Heat a pan half full of the rapeseed oil or use a deep-fat fryer. Fry each ball until golden all over and drain on kitchen paper. Serve with a salad and whatever vinaigrette remains if Maya’s been anywhere near it.

7 Responses to “Rice to the occasion”